Is SEO Dead? (A Data-Driven Answer)

Is SEO Dead? (A Data-Driven Answer) 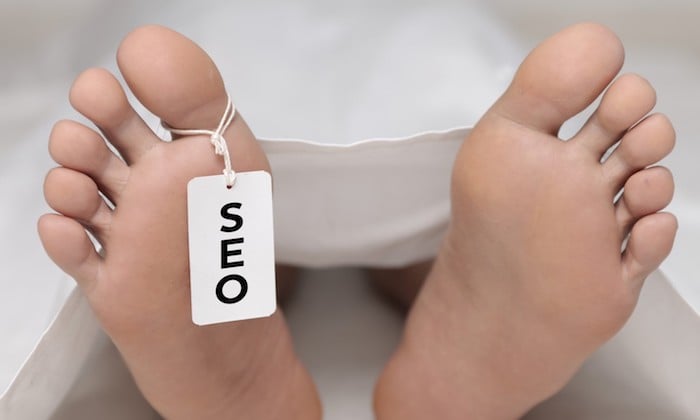 SEO has been changing drastically over the years.

With over 9 algorithm changes a day, it’s safe to say that it is no longer easy to manipulate or game Google.

Well, let’s look at the data and from there I’ll show you
what you should do.

Do you know how many searches take place on Google each day?

Although that’s a lot of searches, there is also a lot of
content being created.

There are roughly a billion blogs on the web.

There are so many blogs that you can find an excessive amount of content on most topics out there.

For example, if you look at the long-tail phrase, “what is digital marketing”, there are only 11,300 global searches a month but a whopping 665,000 pieces of content trying to answer that question. 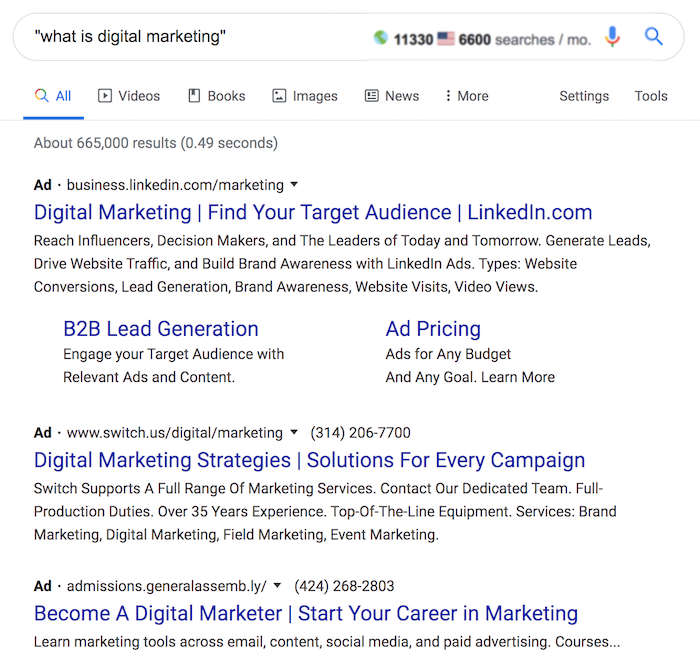 In other words, the supply is much greater than the demand.

You’ll see even more of this for head terms. Just look at
the phrase “banana”: 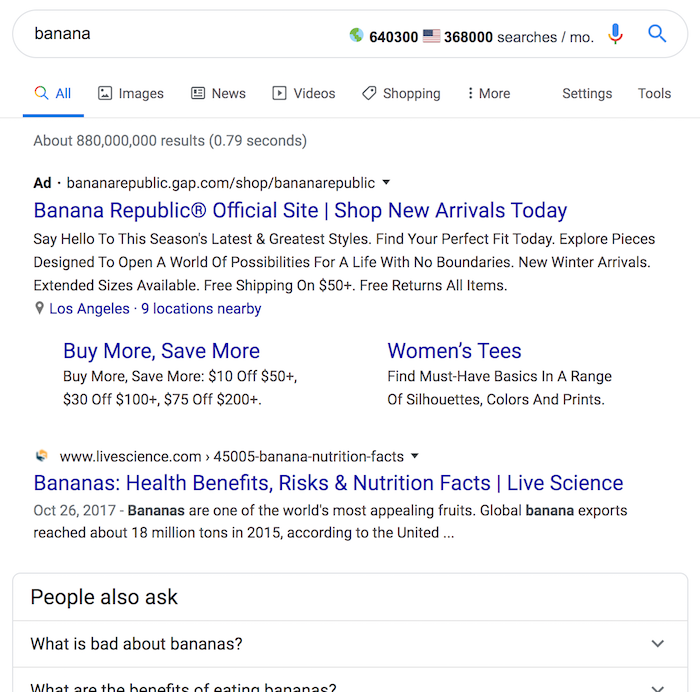 640,300 global searches seem like a high number but there are 880,000,000 million results. Sure, some of those results may not be on the food, banana, but still, that’s a lot of content compared to the search volume.

You can still find search phrases where there is more search volume than content but the trend is continually increasing in which content production is exceeding search demand.

On top of that, Google is turning into an answer engine in which they are answering people’s questions without them having to go to a website. 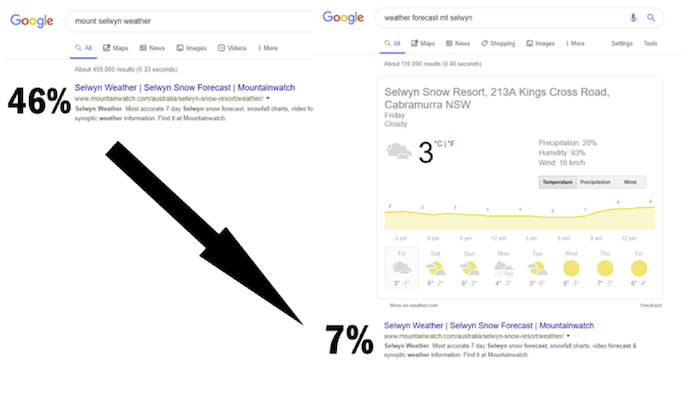 Their clicks from weather-related queries went from 46% all the way down to 7%.

This trend has become so common that the percentage of traffic that Google drives to organic listings (SEO results) has been decreasing over time. 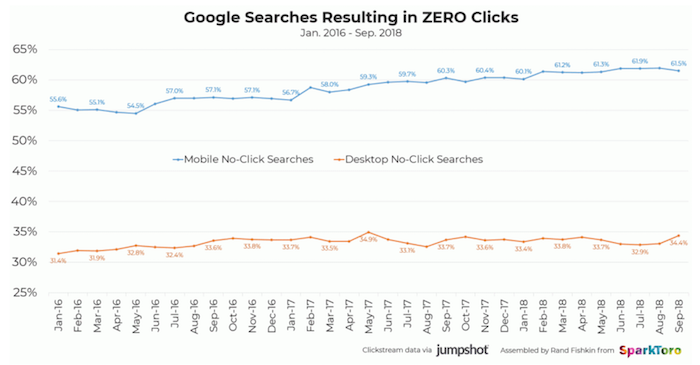 So, does this mean SEO is dead?

It’s actually the opposite.

SEO is not dead

With all of the data, how can that be the case?

First off, all marketing channels become statured over time. It’s just a question of when.

Heck, just look at the image below. It was the first banner ad on the Internet.

Can you guess what company created that banner ad? It was
ATT.

Of the people who saw it, 44% of them clicked on it. Now banner ads generate an average click-through rate of 0.5%.

And, as I mentioned above, it’s with all channels. Just look at Instagram engagement rates: 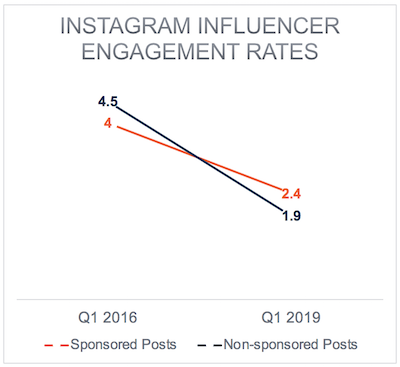 That’s why you are seeing people like Gary Vaynerchuk and Grant Cardone promoting their phone numbers all over Instagram. 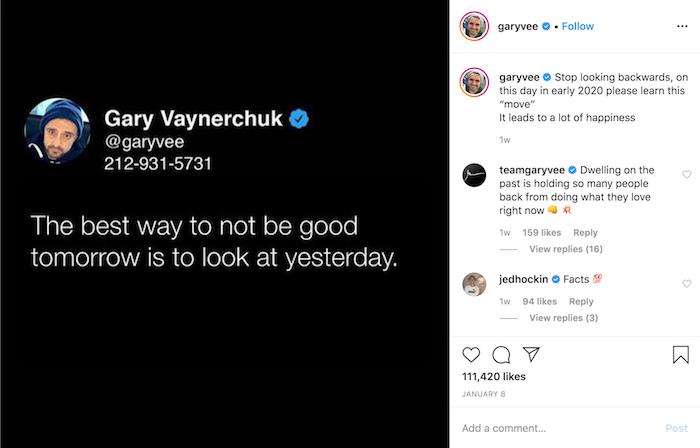 That way they can communicate with their fans directly
without having to deal with algorithms or platforms decreasing their engagement.

But even with those decreasing numbers, you are seeing sponsored posts on Instagram surging by 150%.

In other words, people are still spending money because they
are seeing an ROI or generating enough value in their eyes.

And the same is happening with digital
ad spending. 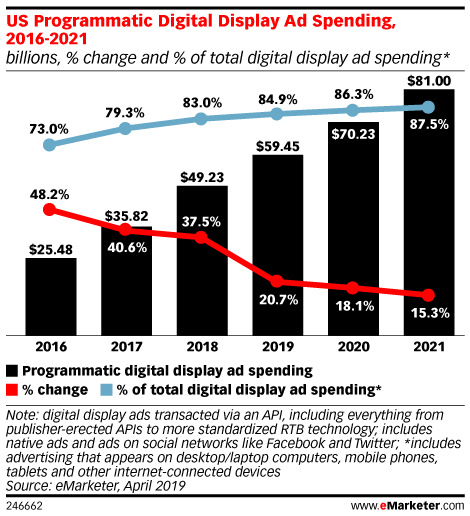 The numbers are on the rise because companies are generating
an ROI.

So, how is SEO still not dead?

As I explained above, just because the metrics aren’t going in your favor doesn’t mean that a channel is dead.

Just look at my search traffic on NeilPatel.com.

Not only do I have to deal with Google’s algorithm like you, but my competition includes other marketers who know what I know… yet I am still able to grow my search traffic even with Google’s decreasing CTRs. 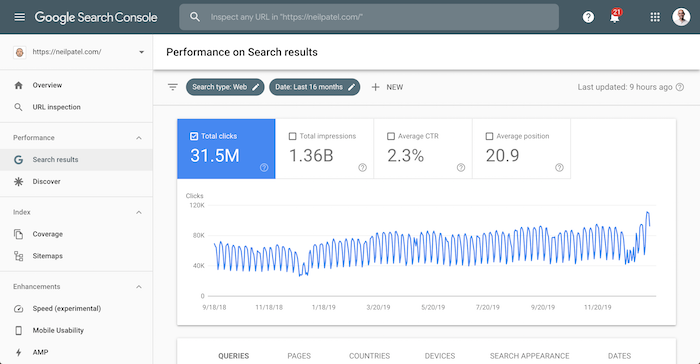 When you look at search as a whole (and I am not only talking about on Bing and Google as people also search on other sites and platforms as well) Google still dominates market share with a whopping 94%. 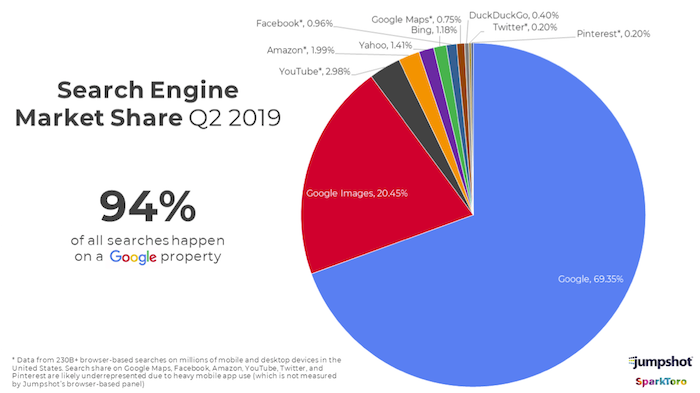 People still use Google and prefer them as their method of search. But what’s changed is how Google is being used.

It used to be where you would use platforms like Instagram
for discovery and Google for commerce (purchasing).

The trend has switched over the years in which Instagram is
being heavily used for commerce and Google is mainly used as a discovery engine.

Just look at this case study by Olay.

Olay sells products related to skincare. One of their products happens to reduce darkness under your eyes.

So, they used to push heavily on ads that sold their
products directly. 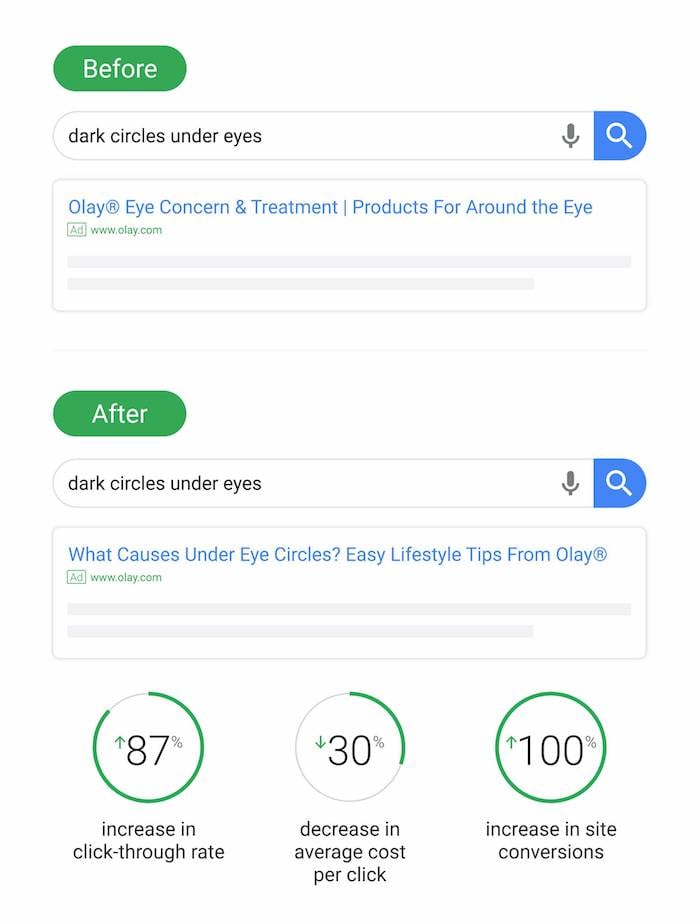 But the moment they changed their ads to focus on education by teaching people how to reduce dark circles under their eyes instead of forcing people to buy their products, their ROI went through the roof.

By sending people to educational-based content first (and then selling through the content), they were able to increase click-throughs by 87%, decrease their cost per click by 30%, and increase conversions by 100%.

This is a prime example of how more people are using Google as a discovery engine first instead of a commerce engine.

Now that you know that Google is shifting to a discovery
engine (for both paid and organic listings), there are a few other things you
need to know if you want to dominate the organic listings.

1: Google wants to rank sites you want to see

Their algorithm core focus isn’t backlinks or keyword density, or a specific SEO metric… the focus is on the user experience.

If a site has millions of backlinks but users hate it, the site won’t rank well in the long run.

Look at this case study of the “best grilled steaks.”

Rand Fishkin had all of his social followers do the
following: 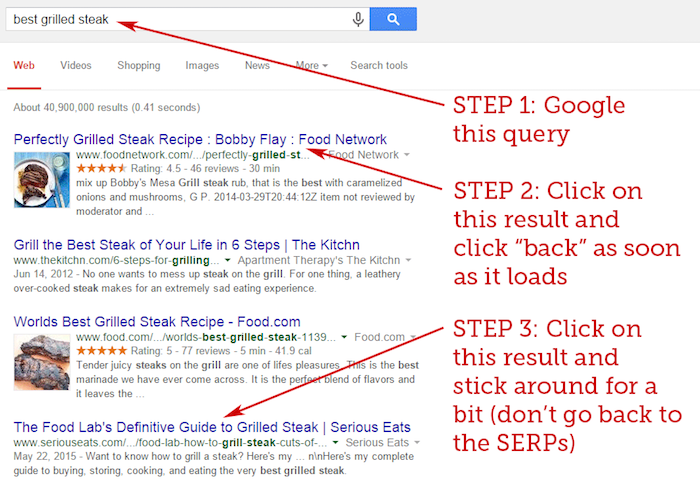 Within 70 minutes, the listing jumped to the top spot. 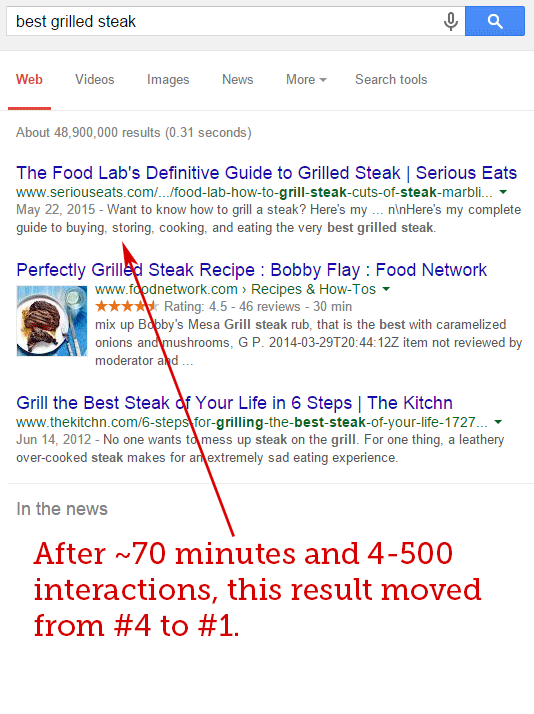 This is what I mean by user signals. You, the end-user, control how Google adjusts rankings.

Google knows you spend hours a day on your mobile device and hours on other sites and applications that aren’t controlled or owned by Google.

So, when they are figuring out what to rank and where to
rank it, they aren’t just looking at their own dataset.

They crawl things like social media and use social signals
to help them better improve their results.

For example, here is a case study on how Google is using social media for search discovery.

Even if you hate the social web, you need to use it more. Not only can it help with your site’s indexing but it can also help with brand building, which indirectly will help boost your rankings as well.

Here are some articles to follow to help boost your social
media presence:

If you don’t believe me, just look at these quotes from Google’s ex-CEO and ex-head of webspam. 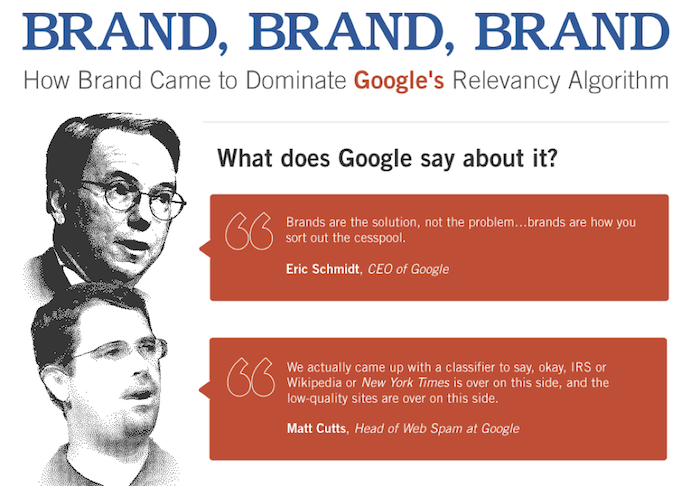 They both believe
in brands.

As your brand grows, you’ll find that your rankings will climb as well.

You saw my search traffic stats earlier in the post, but
here’s a breakdown of how many people found my site by searching for my name in
the last 7 days. 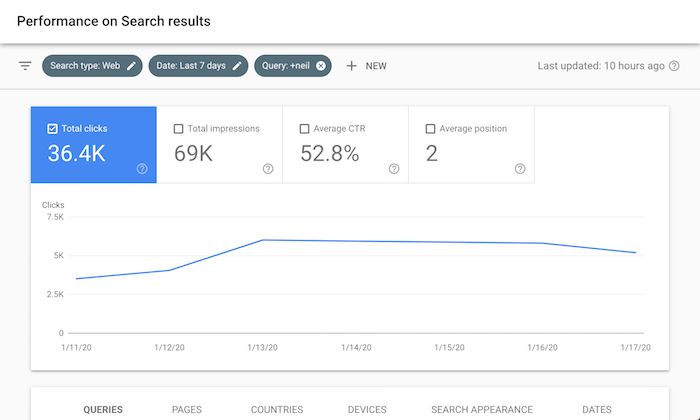 And that number doesn’t even include the misspellings. You would be shocked at how many people spell my name as “niel” instead of “neil.”

Google loves brands. Heck, when you type in “men’s running shoes,” they even have Nike, Adidas, and Asics there.

Branded search volume is more correlated with rankings than links or domain authority. 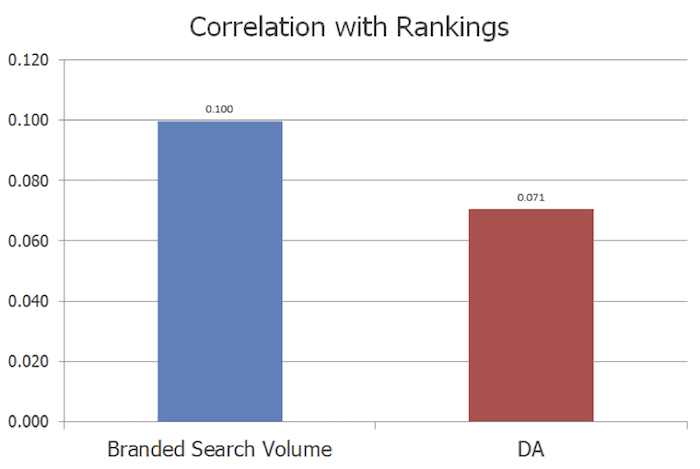 If you want to build a brand, focus on the social media
articles I linked to above and follow the brand building articles below:

If you are still struggling to build a brand, talk to one of my team members about our Digital PR.

Do you remember the old-school site About.com?

Over time, About.com tanked in terms of their Google rankings and the business was dying. There were a few reasons why:

The site didn’t focus on a single niche… it was about everythingThe content was mediocre. They didn’t go in-depth but instead just kept things surface level.They had too much content that no one cared to read.

They decided to rebrand as Dotdash and start niching down. So they took the content on About.com and split it into six specific vertical sites.

When doing this they found that a lot of the content didn’t fit into those 6 verticals or wasn’t up to their new quality standard. This caused them them delete roughly 900,000 articles. 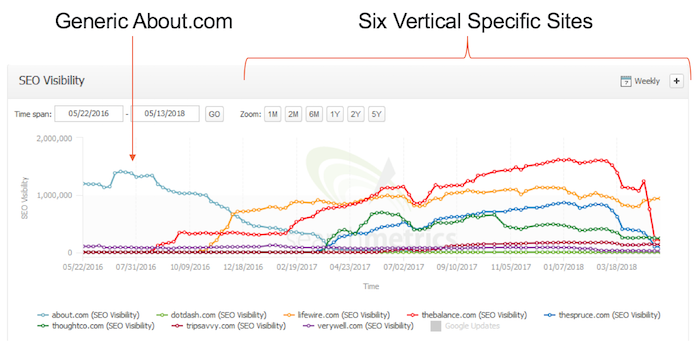 From the data, you can see that they got much more traffic by splitting up their content into niched-down sites.

It was so successful that they took one of their new vertical sites and broke it down further into three niche sites. Here were the results:

This helped them grow their revenue by 140%.

If you want to do well in today’s world of SEO, focus on one niche. Google prefers topic-specific sites because that’s what you and everyone else loves.

Just think of it this way… would you rather read medical advice from About.com or WebMD?

Another thing they did

Have you noticed that when you search on Google the results you see are different than the results of your friends?

It’s because Google is trying to personalize the results to
you. 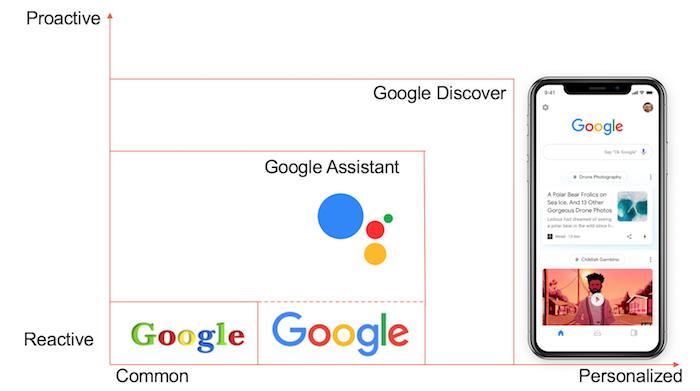 Not just on Google search but anywhere you use a Google device… from a smartphone to Google Home to even their autonomous cars.

With all of the data they are gathering, they are better
suited to understand your preferences and then modify the results to that.

Just think of it this way: Every time you visit a place and you are carrying your mobile phone (especially if it is an Android device), Google may be able to potentially use that information to tailor results to you.

With your website, don’t try and show everyone the same message. If you personalize your experience to each and every user, you will be able to rank better in the long run as it will improve your user metrics.

A good example of this is on my blog.

Right when you land there, I let you pick the type of content you want to see and then the page adapts to your interest.

It’s actually the most clicked area on the blog, believe it
or not.

Sure, click-through rates are going down and Google keeps adjusting its algorithm but that’s to be expected.

Google has made it so you can easily target your ideal customer through SEO or paid ads.

It used to be much more difficult before they came along. That’s why they are able to generate over 100 billion dollars a year in advertising revenue.

Don’t worry about things that aren’t in your control. Instead, start adapting or your traffic and business will be dead.

What do you think about the changing SEO landscape?

The post Is SEO Dead? (A Data-Driven Answer) appeared first on Neil Patel.

What Is Guest Blogging?

How to Find Old Tweets

An Oracle EVP took a brass-knuckled approach with a reporter today; now he’s suspended from Twitter