A Y Combinator-backed startup that is helping major companies efficiently listen to how happy — or unhappy — their employees are and resolve their issues on time to retain talent just raised a new financing round from several high-profile executives.

InFeedo, a four-year-old people analytics SaaS startup with headquarters in Gurgaon, said on Thursday it has raised $3.2 million in its Series A funding round. Bling Capital led the round and its founder, Benjamin Ling, who previously served as a general partner at Khosla Ventures and executive roles at Google and Facebook, has assumed a board seat at InFeedo.

Simon Yoo of Green Visor Capital, Maninder Gulati, chief strategy officer at budget lodging startup Oyo, Munish Varma, managing director for EMEA region at SoftBank and Girish Mathrubootham, founder of SaaS giant Freshworks, are among those who participated in the round.

As a business grows up and the headcount balloons over thousand, ten thousand, and tens of thousands, it becomes impossible for the chief executive to engage meaningfully with employees to gauge their morale and understand if there is anything they wish the company changed.

InFeedo is tackling this challenge through Amber, a chatbot it has built that touches base with employees periodically to quickly check how things are going, explained Tanmaya Jain, founder and chief executive of the four-year-old startup.

On the backend, executives can check the status of their employees across the company and how likely some individuals — especially the top talent — are at leaving the firm. They can check exactly what issues these employees have raised in the past, and whether their concerns were resolved.

Amber is able to track the progress because it remembers what an employee has previously shared. So each future conversation begins with it asking whether anything has meaningfully changed since the last time it spoke to the employee. 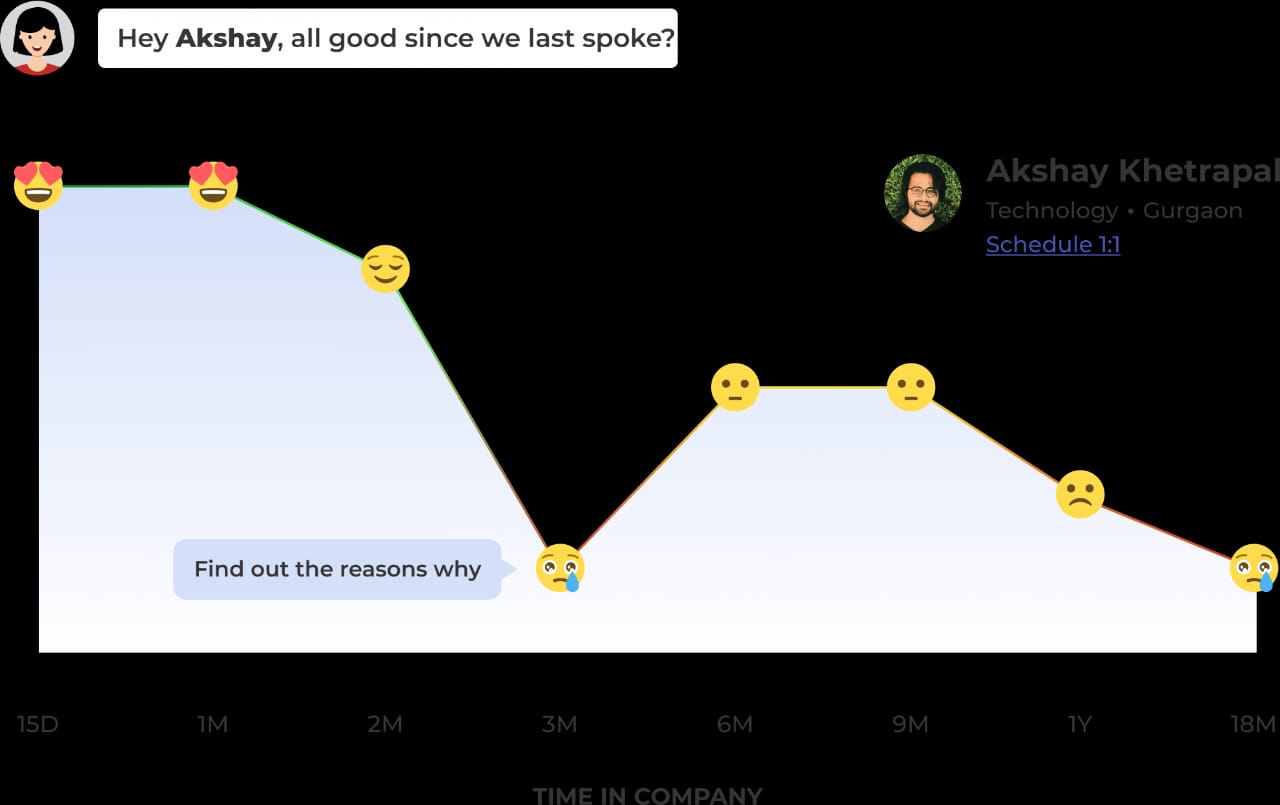 “Almost three years ago, we started using Amber at OYO and I was amazed by the product. We were using this for executive decision-making, to get an accurate pulse of our employees across geographies, functions as we were expanding across the world. I actually reached out to Tanmaya and am excited to be part of this journey,” said Oyo’s Gulati in a statement.

For Jain, 26, InFeedo’s current avatar is the third pivot he has made at the startup. InFeedo started as an edtech platform to create a feedback loop between students and their teachers. The startup then explored building a social network for companies. Neither of those ideas gained much traction, he explained. During the third attempt, Jain said he spent days at his early customers to understand exactly what features they needed.

As part of the new financing round, InFeedo, which has raised $4 million to date, said it has delivered partial exits of $1.1 million to early investors and early employees or those who left. “Helping people around me make so much money has been one of the most fulfilling things for me,” he said, adding that this liquidity at the time of a pandemic has been immensely useful to many.

The startup plans to deploy the new funding to make Amber understand multiple languages, a key aspect that Jain said would help the startup better serve clients in adjacent markets to India. InFeedo also wants to expand the use cases of Amber and experiment with new technologies such as GPT-3. It is also hiring for product, engineering and marketing leadership roles.