E-commerce giant Flipkart is planning to launch a hyperlocal service that would enable customers to buy items from local stores and have those delivered to them in an hour and a half or less. Yatra, an online travel and hotel ticketing service, is exploring a new business line altogether: Supplying office accessories.

Flipkart and Yatra are not the only firms eyeing new business categories. Dozens of firms in the country have branched out by launching new services in recent weeks, in part to offset the disruption the COVID-19 epidemic has caused to their core offerings.

Swiggy and Zomato, the nation’s largest food delivery startups, began delivering alcohol in select parts of the country last month. The move came weeks after the two firms, both of which are seeing fewer orders and had to let go of hundreds of employees, started accepting orders for grocery items in a move that challenged existing online market leaders BigBasket and Grofers.

Udaan, a business-to-business marketplace, recently started to accept bulk orders from some housing societies and is exploring more opportunities in the business-to-commerce space, the startup told TechCrunch.

These shifts came shortly after New Delhi announced a nationwide lockdown in late March to contain the spread of the coronavirus. The lockdown meant that all public places including movie theaters, shopping malls, schools, and public transport were suspended.

Instead of temporarily halting their businesses, as many have done in other markets, scores of startups in India have explored ways to make the most out of the current unfortunate spell.

“This pandemic has given an opportunity to the Indian tech startup ecosystem to have a harder look at the unit-economics of their businesses and become more capital efficient in the shorter and longer-term,” Puneet Kumar, a growth investor in Indian startup ecosystem, told TechCrunch in an interview.

Of the few things most Indian state governments have agreed should remain open include grocery shops, and online delivery services for grocery and food. And that has naturally attracted many firms. 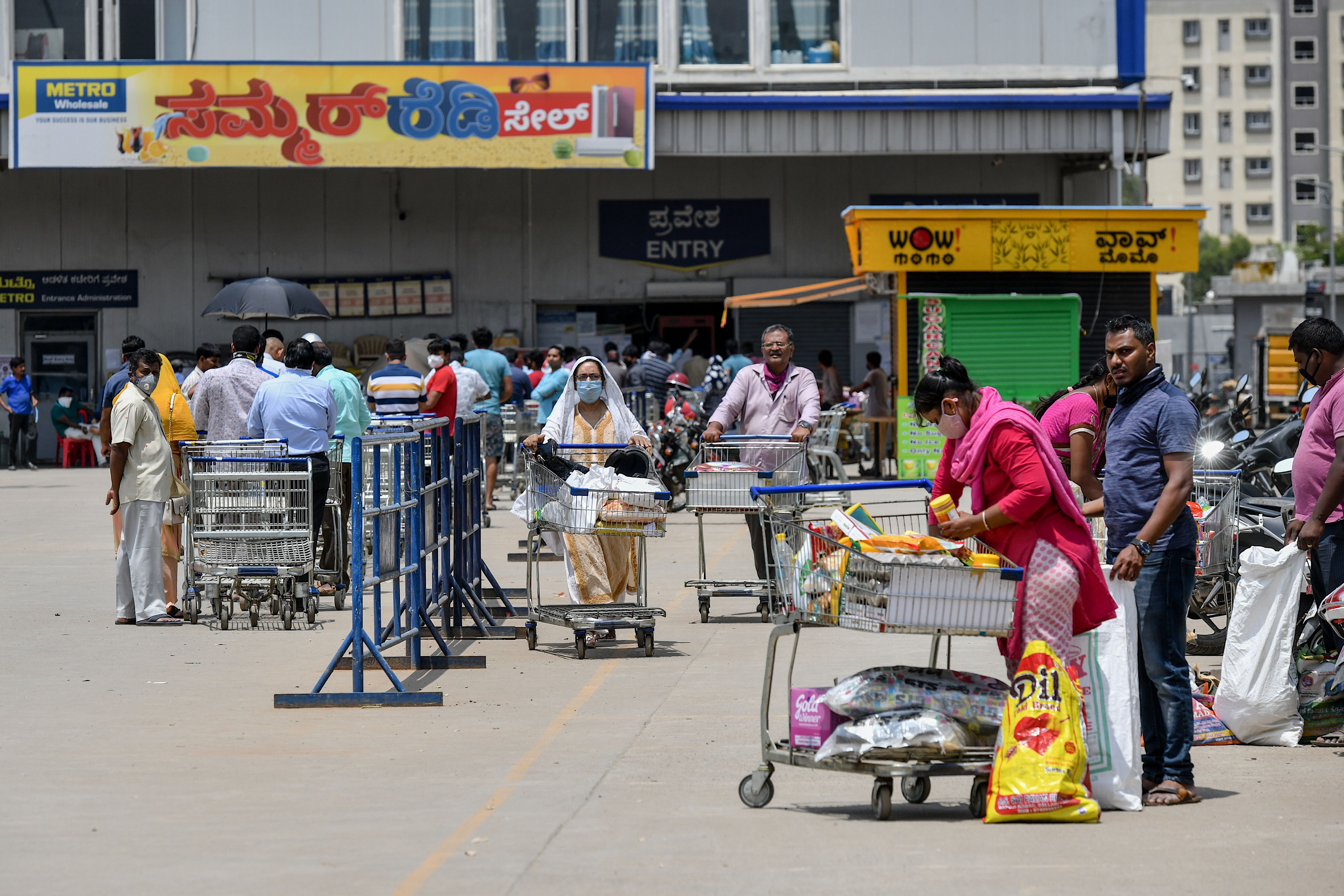 People buy groceries at a supermarket during the first day of the 21-day government-imposed nationwide lockdown as a preventive measure against the spread of the COVID-19 coronavirus, in Bangalore on March 25, 2020. (Photo by MANJUNATH KIRAN/AFP via Getty Images)

Meesho’s attempt is still in the pilot stage, said Vidit Aatrey, the Facebook-backed startup’s co-founder and chief executive. “We started grocery during the lockdown to give some income opportunities to our sellers and so far it has shown good response. So we are continuing the pilot even after lockdown has lifted,” he said.

ClubFactory, best known for selling low-cost beauty items, has also started to deliver grocery products, and so has NoBroker, a Bangalore-based startup that connects apartment seekers with property owners. And MakeMyTrip, a giant that provides solutions to book flight and hotel tickets, has entered the food delivery market.

Another such giant, BookMyShow, which sells movie tickets, has in recent weeks rushed to support online events, helping comedians and other artists sell tickets online. The Mumbai-headquartered firm plans to make further inroads around this business idea in the coming days.

For some startups, the pandemic has resulted in accelerating the launch of their product cycles. CRED, a Bangalore-based startup that is attempting to help Indians improve their financial behavior by paying their credit card bill on time, launched an instant credit line and apartment rental services.

Kunal Shah, the founder and chief executive of CRED, said the startup “fast-tracked the launch” of these two products as they could prove immensely useful in the current environment.

For a handful of startups, the pandemic has meant accelerated growth. Unacademy, a Facebook-backed online learning startup, has seen its user base and subscribers count surge in recent months and told TechCrunch that it is in the process of more than doubling the number of exam preparation courses it offers on its platform in the next two months.

Since March, the number of users who access the online learning service each day has surged to 700,000. “We have also seen a 200% increase in viewers per week for the free live classes offered on the platform. Additionally there has been a 50% increase in paid subscribers and over 50% increase in average watchtime per day among our subscribers,” said Gaurav Munjal, co-founder and chief executive of Unacademy.

As with online learning firms, firms operating on-demand video streaming services have also seen a significant rise in the number of users they serve. Zee5, which has amassed over 80 million users, told TechCrunch last week that in a month it will introduce a new category in its app that would curate short-form videos produced and submitted by users. The firm said the feature would look very similar to TikTok.

The pandemic “has also accelerated the adoption of online services in India across all demographics. Many who would not have considered buying goods and services online are starting to adopt the online platforms for basic necessities at a faster pace,” said venture capitalist Kumar.

“As far as expansion into adjacent categories is concerned, some of this was a natural progression and startups were slowly moving in that direction anyway. The pandemic has forced people to get there faster.”

Roosh, a Mumbai-based game developing firm founded by several industry veterans, launched a new app ahead of schedule that allows social influencers to promote games on platforms such as Instagram and TikTok, Deepak Ail, co-founder and chief executive of Roosh, told TechCrunch.

ShareChat, a Twitter-backed social network, recently acquired a startup called Elanic to explore opportunities in social-commerce. OkCredit, a bookkeeping service for merchants, has been exploring ways to allow users to purchase items from neighborhood stores.

And NowFloats, a Mumbai-based SaaS startup that helps businesses and individuals build an online presence without any web developing skills, is on-boarding doctors to help people consult with medical professionals.

Startups are not the only businesses that have scrambled to eye new categories. Established firms such as Carnival Group, which is India’s third-largest multiplex theatre chain, said it is foraying into cloud kitchen business.

Amazon, which competes with Walmart’s Flipkart in India, has also secured approval from West Bengal to deliver alcohol in the nation’s fourth most populated state. The e-commerce giant is also exploring ways to work with mom and pop stores that dot tens of thousands of cities and towns of India.

Last week, the American giant launched “Smart Stores” that allows shoppers to walk to a participating physical store, scan a QR code, and pick and purchase items through the Amazon app. The firm, which is supplying these mom and pop stores with software and QR code, said more than 10,000 shops are participating in the Smart Stores program.