Data shows which tech roles might be most vulnerable amid layoffs

Data shows which tech roles might be most vulnerable amid layoffs

Layoffs are having a big impact on industries across the board due to COVID-19. This week alone news came out of massive cuts for TripAdvisor, Lyft, and reportedly Juul and Uber.

But according to data tracker Layoffs.fyi, the cuts have affected certain job roles more than others.

Sales and customer success roles are the most affected by post-coronavirus startup layoffs, crowd-sourced data shows. Other top categories include engineering and operations roles.

Earlier this month, restaurant tech startup Toast cut 50 percent of staff. About 70% of those laid off were in the sales or customer success roles. In restaurant review platform Yelp’s layoffs, 67% of cut positions were in the same bucket.

Equity management startup Carta laid off people, too, and about 47 percent of those cuts were in the sales or customer success roles.

It is not hard to make sense of why sales and marketing roles are the most impacted. The very function of these jobs is tied to a healthy market.

Sales and new deals have slowed or halted altogether for many businesses during the COVID-19 pandemic. This is because social distancing, and overall economic weariness, might not have people spending as much as they normally would have.

The cuts filter out disproportionately to other startup ecosystems, as sales and marketing roles are often based in satellite offices.

But the cuts don’t just impact sales. In a number of cases, layoffs in one department adversely impact all departments of the company. For example, Carta’s CEO Henry Ward noted that reductions across sales, marketing, onboarding and support will likely seep into other roles as well.

“As those departments become smaller, many of the teams that support those departments like recruiting, HR, operations, and parts of R&D, have to downsize with them,” Ward wrote in a Medium post. “Even though the analysis starts with customers, it quickly starts affecting all parts of the organization. This makes sense. We exist only because our customers exist and allow us to serve them. And when our customers suffer we suffer too.”

The graph below shows a makeup of roles impacted by COVID-19 related layoffs. 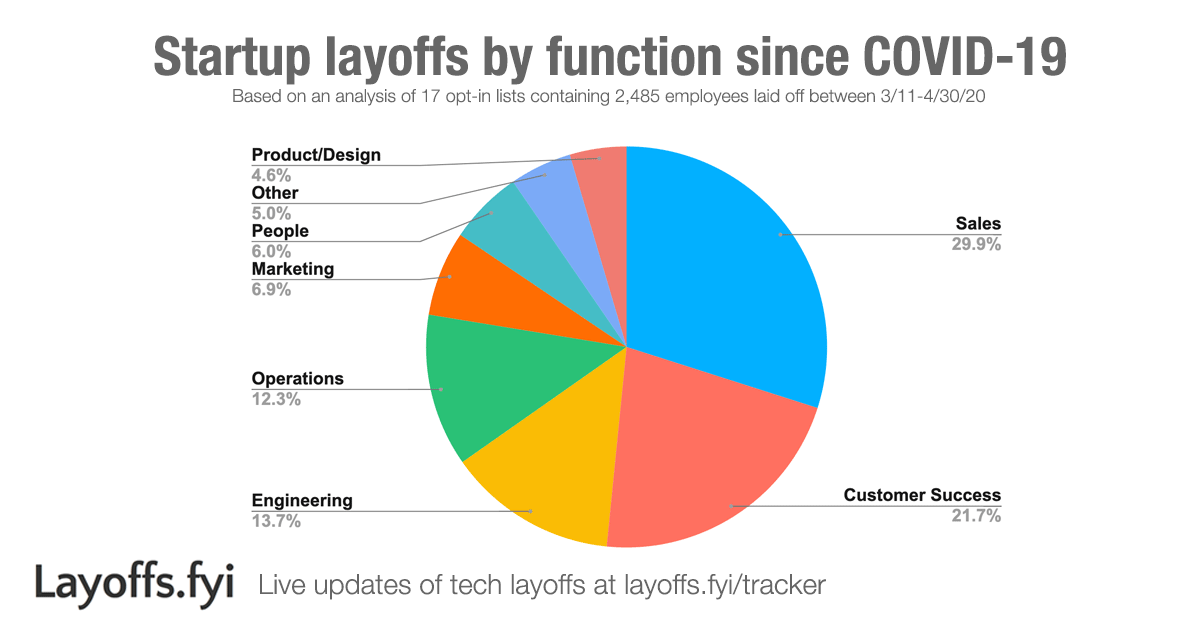 Engineers aren’t immune either. According to the report, engineers historically land high, competitive salaries versus sales roles, which largely are based on commission. In some cases, it means that a company trying to dial back costs needs to look at the highest-paid roles and slim accordingly.

In Groupon and Eventbrite, engineering roles were the majority of positions that were cut, per Layoffs.fyi. Operations roles were also among the most cut for companies like Ritual and Turo.

Check out the layoff tracker tool here. Tip us of any cuts you’re hearing or experiences at tips@techcrunch.com, or tweet me at @nmasc_.